Chinese time. Don't know much about Chinese food, other than that I enjoy it in Chinese restaurants as a change from "Indian" food. Oddly enough I've had a few Chinese meals in restaurants in India where it was common to find both Indian and Chinese food on the menu. 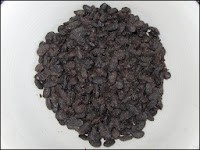 This is my attempt at beef in black bean sauce. Those would be the black beans, pictured above. They smell marvellous. I soaked the bowl of beans for some time in (initially hot) water which to which I added varying quantities of the soy sauces and vinegars (and fish sauce) pictured in the banner at the top of the page. 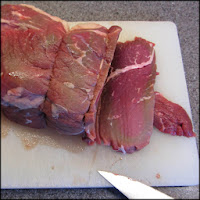 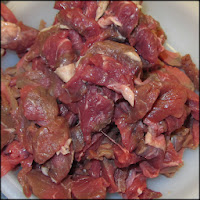 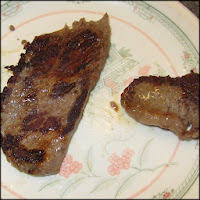 There was a small topside joint in the reduced section, so I bought that and chopped it up. I did fry a slice too as a snack. 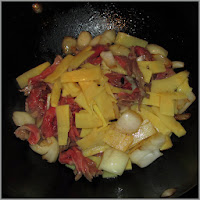 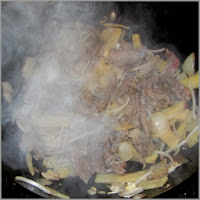 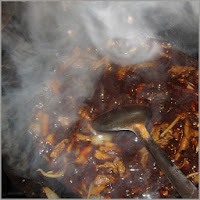 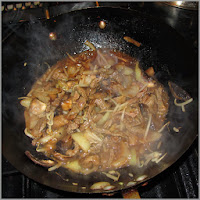 But back to the Chinese. Fry an onion and some garlic, add the meat and Chinese type veg. - Bamboo shoots and beansprouts maybe. Fry for a bit in the very hot oil. add some fresh ginger or ground dried if not, and a smidge of chilli powder. Add the  marinated beans and associated goo. Top up with a bit of stock (Powdered or cube veg or chicken  works well.  Thicken the result with a teaspoon or two of cornflour dissolved in water. 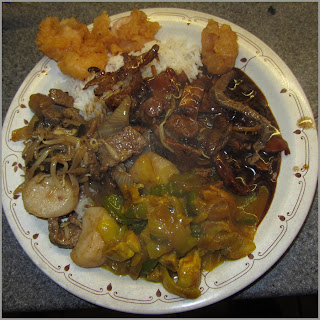 To go with black bean stuff there's more beef, in Oyster sauce with water chestnuts and mushrooms, prawns in a light crispy batter and a turmeric coloured curry, rice and noodles. all very tasty